Computers get image-conscious by Kayne Putman

A picture paints a thousand words – to humans, at least. Traditionally, however, images have made little sense to computers, which have no conception of the meaning behind the strings of code that make up a digital image.

Of course, some computers have long had the ability to identify and characterise basic images – think of the number plate recognition systems that link speed cameras to the DVLA database. For a world that increasingly depends on a multitude of real-time processes, however, we need computers to have a much more advanced ability to identify and classify objects, and then to react to what they ‘see’.

A vision of the future

Thanks to advances in AI and deep learning, we’re starting to see this vision becoming a reality. A form of AI, computer vision is a new discipline that trains machines to interpret and understand the visual world using digital images from cameras and videos combined with deep learning models that mimic the processes used by the human brain.

Insurers, for example, are using the technology to categorise claims by teaching computers how to recognise different types of damage, estimate the costs of repair, and understand the impact on premiums.

Computer vision might seem like a peripheral function, more impressive than it is useful. Why, after all, do you need a computer to recognise an image? In fact, there is a large and growing range of applications for computer vision across many industries. Insurers, for example, are using the technology to categorise claims by teaching computers how to recognise different types of damage, estimate the costs of repair, and understand the impact on premiums.

In the past, this task would have required human intervention to analyse pictures, creating a time-consuming bottleneck and requiring an employee to intervene in the process.

But computer vision isn’t about replacing human workers, but rather empowering them to do their job better. As with all well-applied AI systems, the technology enables employees to focus on higher-value tasks by automating processes that rely on image recognition. 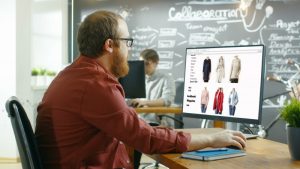 We’re already seeing the value in lots of industries. In retail, for example, brands are applying image recognition to their entire online catalogue to help with product recommendation engines, or to deliver targeted offers to customers in-store.

In the utilities sector, camera drones are helping maintain critical infrastructure. Having learned how to identify faulty equipment, the cameras can generate reports automatically, so engineers can fix the problem instead of spending hours poring over images. The same goes for production lines, with manufacturers using the technology to identify defective products.

What’s most exciting about computer vision is it can analyse such a huge number of parameters that it can make incredible, almost subjective judgments.

Take SciSports, the Dutch sports analytics company, for example. SciSports uses real-time tracking technology that automatically generates 3-D data from video, recording players’ every movement and rating them on a range of capabilities. The technology has already proven invaluable to coaches who want to analyse players’ performance in real-time, and to scouts looking to unearth the next Messi.

Computer vision might be at an early stage, but it’s already providing a glimpse of its future applications. The technology’s deep learning ability will be integral to everything from teaching self-driving cars about dangers on the road, to catching criminals through enhanced CCTV analysis.

With so many potential uses, every organisation should be investigating how computer vision can put every employee fully in the picture.

Get Involved with DSF